Oh, how convenient that Bing Crosby’s “I’ll Be Home For Christmas” just started playing on my Pandora Radio Christmas list. Boooo. No, I wont be home for Christmas, and yes, this is my first time ever being away from my family and home for Christmas. I can deal with this no problems, but every time this song plays I get a little bit sad, just a teeny weeny bit because…

A typical Christmas at my home back in Australia

So, feeling a bit down about this, a few Cirque mates (who are also spending their first Christmas away from their families) and I were feeling rather Christmasy on Monday night. We decided to head down to Disney’s Hollywood Studios and check out the ‘Spectacle of Dancing Lights’. I’d heard about this from other Disney Cast Members and the hype surrounding it, so I was extremely excited to get down there and check it out,  especially since Australia doesn’t really go all out with the Christmas lights… and besides, I’m a sucker for Christmas!

OH. MY. GOD. is all that comes to mind. I could not believe my eyes! The set up was INSANE! Sooooo pretty. I don’t think I’d ever seen anything so amazing before in my life! Not one single wall went to waste, there were lights absolutely every where. I stood there kind of dumbfounded for the first few minutes. I’m pretty sure Mike has a video of me running around with my mouth wide open and all you can hear me saying is “Woahhhh!” I was like a five year old let loose in a candy store. I felt so happy at that exact moment in time… until “I’ll Be Home For Christmas” started playing over the sound system haha. 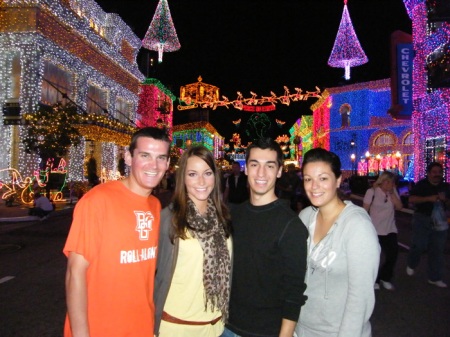 You’re probably wondering where the ‘dancing’ part comes into all of this, right? Right. Well, every 10 to 15 minutes, a Christmas carol comes blasting over the sound system and the lights start dancing to the beat of the song. As if the non-dancing lights weren’t already good enough, the dancing lights come along and kick the non-dancing lights right in the butt! Ouch. This is just all too much for me. I must look like the biggest tool ever to grace this planet as I walk around in awe with my mouth hanging open. Again, I feel like a six year old allowed to stay up all night and watch TV instead of going to bed at 8pm. So, so pretty. Nothing tops this. I start to feel a little bit OK about missing Christmas in Australia; just a little bit.

I could post a plethora of photos and videos from this event, but not a single one will do this spectacle justice. Do yourself a favour and get your butt down to Hollywood Studios from now until July 4, 2010 to check this out. You will not be disappointed!

Hollywood Studios closed at 8pm so we had to get moving. We were all still in a very Christmasy mood so we headed over to the AMC at Downtown Disney and went to see Disney’s ‘A Christmas Carol‘ in 3D. Two thumbs up. Amazinggggg. I’m so glad we picked the 3D session and not the regular viewing because this movie just looked so phenomenal in 3D. I found it rather amusing how much they made Colin Firth’s character look like him and Jim Carrey did a sensational job voicing many of the characters. Although this may seem like a children’s movie, I think it was rather creepy at parts, enough to scare little kids!

What a great start to the holiday season 🙂