Boyz II Men Still Have It…

And by IT, I mean the wow-factor! Man, after 19 years, those fellas are still bloody brilliant!

Today was the first day of three that Boyz II Men performed at the EPCOT Food & Wine Festival as part of the Eat To The Beat concert series and they didn’t disappoint. They know how to put on a good show; the audience were up on their feet, dancing and swaying from side-to-side. After all these years their voices are still as heavenly as when they were at the peak of their popularity. I quietly melted away in my little corner while they sang “End Of  The Road” to me… or at least I imagined they were singing it to me…

Next year will mark the 20th anniversary of Boyz II Men and they announced today that they would be doing a “special little something” that may possibly involve the return of their fourth band member. They also plugged their new album entitled “Love” that is dropping late November of 2009. 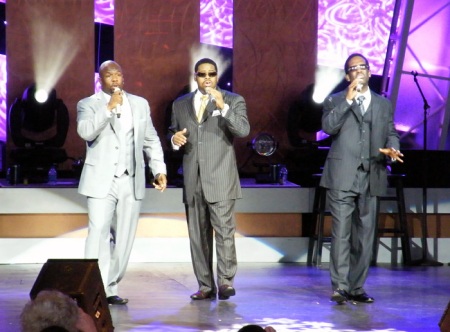 If you didn’t get a chance to catch the boys tonight, they will be performing at the Eat To The Beat concert series at EPCOT on Tuesday the 27th and Wednesday the 28th of October: 5:15PM, 6:30PM and 7:45PM at the American Gardens Theater.

This entry was posted on Monday, October 26th, 2009 at 10:37 PM and is filed under Concerts, Disney College Program, Disney's Epcot, Just Travel, Life, Travel, USA, Walt Disney World. You can follow any responses to this entry through the RSS 2.0 feed. You can leave a response, or trackback from your own site.